After taking Sherri Lynn Wood’s Improv Round Robin class at QuiltCon 2013, three of us in the Seattle Modern Quilt Guild decided we had not had enough fun. Deborah Ferguson (her round robin quilt is “With A Little Help From My Friends“), Chandra Wu (her quilt is “Happy Times“), and I used the “listen and respond” technique we learned from Sherri Lynn but allowed one month to work on our additions. Churn Dash 2: Complementary is the result of this happy collaboration.

I chose to start with a complementary blue and orange color scheme and riffed a traditional block form. Deb and Chandra captured some of their work in progress. They both took the block fracturing concept and ran with it. Nice job, ladies! 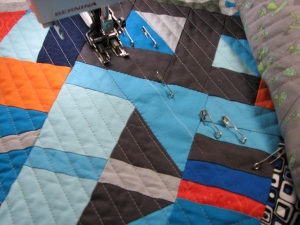 I sent the quilt to the 2014 Northwest Quilting Expo in Portland (OR) as part of the Seattle Modern Quilt Guild exhibit. The show was fantastic with many wonderful quilts on display, both traditional and modern. Bill Volckening over at WonkyWorld did a post on the show and I was surprised and completely wowed when he featured Churn Dash 2.

Given Bill’s encouraging comments, I decided to enter Churn Dash 2 for QuiltCon 2015 and was surprised again when it was accepted. See? You never know what affect your comments have.

Favorite things about this quilt: fractured and deconstructed blocks, straight line quilting, memories of working on Deborah’s and Chandra’s quilts

Churn Dash 2: Complementary hanging in the Seattle Modern Quilt Guild Exhibit at Folklife Festival, Seattle, May 2014 (far left, but you could figure that out)